Also known as an aattukal, the kalloral or wet grinding stone used to be an indispensable tool in every south Indian home. Then there was the flat ammi kal, which was used for dry grinding masalas. I have spent many an hour in my girlhood grinding idli, dosai or vadai batter and chutneys for my mother and grandmother. Time ceased to have any meaning as you sat cross-legged on the ground before the grinder and rotated the kozhavi in its hole.

Not all kallorals are made equal. Some are too shallow or too deep, or the kozhavi is not a perfect fit. There is art in the making, as well as in the use, of the grinding stone. Today, those arts have almost disappeared. With election handouts of electric mixer-grinders, and electricity in all the villages, at least in the south (no matter how unreliable), we are probably the only people who still use a kalloral. I think ammi kals are more widely used, though.

No doubt we are acquiring new skills all the time, and freeing ourselves from various drudging chores, but it still seems a pity that we are losing the old skills. Especially because they were slow jobs that made room for thought and conversation. I think if I lived in North America, I would have liked to belong to an Amish or Menennite community. Not for the religious part, but the life. On a visit to Canada some years ago, I was lucky enough to be taken to a Menennite farm (thanks, Chittu!). It was at the end of April and snow was still thick on the ground, so we were taken on a horse-drawn sledge to a barn where maple-syrup was being made. It was one of the most delicious and memorable experiences of my life.

To get back to the kalloral. My mother and I have a great fondness for it. About 60 years old (thus earning its title of ‘old stone’), it traveled with us across the country, through all my father’s transfers. I inherited it some twenty-five years ago, when my mother gave up her household. At one point, my maid in Bangalore asked if she could have it, and it went off to her house, where it lived for ten years. When we bought our farm and decided we would live off the grid, I thought of that kalloral. Yellamma was no longer using it. Her daughters and daughter-in-law preferred to use a mixer. So I shamelessly cadged it back. And here it lives now, a respected member of the family. 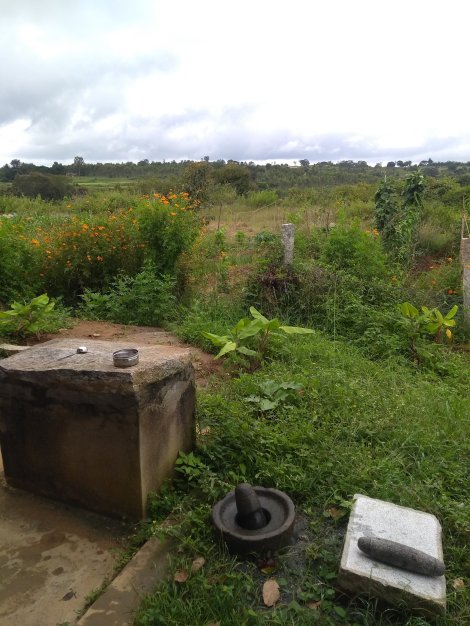 To its right, you can see its little sister, the ammi kal, which is more ornamental than useful, but occasionally pressed into service. To its left is the clothes-scrubbing stone.

Unfortunately, this whole system is too messy for a modern kitchen. You need the kitchen of the old days, with a drain next to the kalloral, which would channel the waste water into the garden through a hole in the wall. The entire kitchen floor would be washed every day too, and the hole plugged for the night with a stick, a stone, or a rolled up rag. My kitchen has no hole in the wall, but I consider I’ve done better – my rare bouts of grinding take place outdoors, where I can gaze at the clouds and the birds as I work.

Here is a thenga (coconut) thogayal (chutney) I’m making – a favourite in traditional Tamil cuisine. (Recipe coming soon!) Once it’s done, I will wash the kalloral out onto the grass, and the water will run down to the little banana trees at the foot of the slope. These trees are the survivors of the last elephant raid and, like Topshe the dog, they really seem to love coconut!