A couple of years ago, I did an online geology course offered by the American Museum of Natural History on Coursera. It was a terrific course, exciting and packed with learning. For the end assignment, we had to write about a local geological feature, and I naturally chose Pandavar Malai, the hill near our farm. It was a thrilling moment when I discovered that it is nearly 3 billion years old! Though there is an air of settled peace and calm about the place, it has led an adventurous life, moving enormous distances across the earth’s surface. Its last location was somewhere near Antarctica! Interested? Read my report below.

Pandavar Malai is a hill situated in the southern part of the Deccan Plateau. The Geology and Mineral Map and Report of Tamil Nadu (available here) shows that this area is part of the Peninsular Gneissic complex, which was formed from mantle-derived magma in the Archaean era, between 2.5 and 3.5 billion years ago. Further reading revealed that it was originally part of the ancient super-continents Ur, Columbia, Rodinia, Pangaea and Gondwana (from oldest to youngest). Gondwana began to break up around 185 million years ago, in the Mesozoic era, and drifted apart to form the present-day southern continents. The Indian subcontinent, which formed part of eastern Gondana, moved eastward and northward, until it eventually hit the Eurasian mass in the Cenozoic era, forming the Himalayas about 55 million years ago. 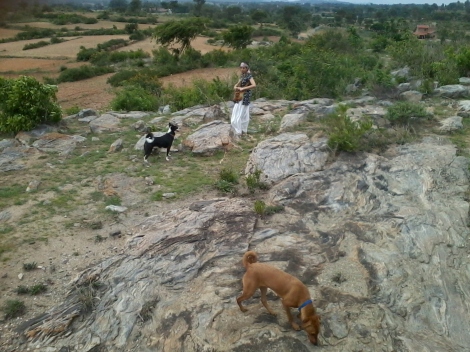 The Indian peninsula is composed of a number of cratons, including the West Dharwar Craton (WDC) and the East Dharwar Craton (EDC) (see map). The WDC is dated to early Archaean, about 3.6 billion years, while the EDC, in which Pandavar Malai is located, is late Archaean, about 2.7 billion years. The EDC is bounded to the north by the Deccan Traps, to the west by the WDC and the Closepet granite belt, to the east by the Eastern Ghat Mobile Belt, and to the south by the Moyar Bhavani Shear Zone and the Neoproterozoic Southern Granulite terrain. The EDC is composed of the mainly granitic Dharwar Batholith, with greenstone belts, intrusive volcanic and sedimentary basins of a later date. Pandavar Malai, lying in the south-east corner of the EDC, is in a transition zone between the distinct belts. The EDC is believed to have been a landmass, formed by a magmatic event around 2.7 billion years ago, which obliquely converged with the WDC, causing sinistral transpressive shear systems along the margins. Zircon dating indicates that the older crust was thrust below the younger crust when the convergence occurred. Since this region has been geologically stable for over 2.5 billion years, except for tectonic plate movement, the rocks remained exposed. The main geological processes that they have undergone are metamorphosis (due to the intense heat and pressure caused by plate collisions) and erosion. Metamorphosis explains the different colours and patterns to be observed in the rock, while the exposed and weathered surfaces, well rounded where they have not been broken by human agency, bear evidence to the processes of erosion.

Now to identify the rock itself. The Rock Identification Tables on this site have very useful pictures and descriptions of igneous and metamorphic rocks, particularly granites, granulites, gneisses and charnockite, all of which are common in this part of the East Dharwar Craton. An article on the charnockites of Kabbaldurga (located about 40 km to the west of Pandavar Malai) seemed particularly relevant. Fig 2 of this article shows the charnockite patches in the host gneiss with an intricate folding pattern, which closely corresponds to the rocks of Pandavar Malai.

If all this excites you as much as it does me, I recommend, as further reading, Pranay Lal’s fascinating book, Indica: A Deep Natural History of the Indian Subcontinent. I’m currently reading it, and will post a review when I’m done.

Reading about the earth always reminds me of these verses from Tennyson:

There rolls the deep where grew the tree.

There where the long street roars, hath been

The stillness of the central sea.

The hills are shadows, and they flow

From form to form, and nothing stands;

3 responses to “Geology of Pandavar Malai”