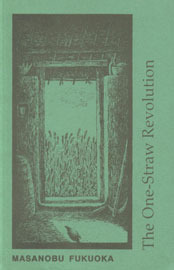 The One-Straw Revolution by Masanobu Fukuoka, Other India Press.

“The ultimate goal of farming is not the growing of crops, but the cultivation and perfection of human beings.”

I came to this book after reading something of permaculture, and Fukuoka’s own later books. Despite this, the ideas were electrifying! The idea of not working for your food is intrinsically appealing. What animal works for its food? It locates it, reaches out, and eats it. Why should we be any different? Nature provides for all.

These ideas are so simple and obvious, you can’t help wondering why agriculture ever went the chemical route. The arguments against: Natural farming is said to be fine to feed a farmer and his family, with some surplus for cash: not enough to feed the urban masses. You can read more on this debate here. I for one am convinced that there will be enough to go round, just not enough for people to waste. However, this requires an adjustment in thinking all round. For instance, we need to move back to local and seasonal foods. We need to stop expecting vegetables to be perfectly shaped and coloured; we need to train our tastebuds to appreciate more earthy flavours, and stop craving exotic foods that evolved in different climatic conditions. It’s difficult, but if we are to save the planet and its inhabitants, we need to start moving towards such a mindset.

If your heart sinks at the idea of giving up your favourite foods, be of good cheer! The permaculturists who came after him and built on his ideas — starting with Bill Mollison in Australia — are kinder on the urban gourmet. They have grown and naturalized many exotic varieties of fruits and vegetables in their gardens. But Fukuoka was a pioneer – a sort of rishi, who lived on rice and sesame – and the austere life he describes is inspiring in its own way. You wouldn’t expect it, but he’s sometimes funny too! When he describes how, in the early years, he killed off his father’s entire orchard as he perfected ‘do nothing’ farming, you have to laugh out loud.