About 15 years back, I got so disgusted by the polythene bags littering the roads of Bangalore, and other Indian cities, that I decided to carry my shopping bags everywhere I went. Since then, I’ve been exploring alternatives to plastic in all the things we take for granted, from food packaging to toiletries. In that time, the amount of plastic waste in our environment has been increasing steadily, until it looks like we might choke on our own refuse. The roads around our farm, which used to be pristine, have begun to sprout plastic bags, cups and spoons: signs of ‘civilization’, as the local people learn how convenient it is to buy and eat out of plastic and toss the containers.

The Perils of Plastic 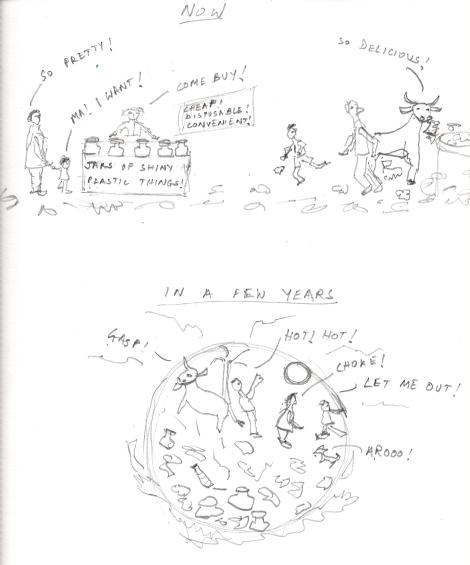 However, to look on the bright side, awareness of our own destructiveness has increased, and public and private efforts to collect/ reuse/ recycle our waste have grown ever more serious. As well, alternatives like biodegradable plastics and detergents, starch-based packaging, etc are constantly being developed and improved on. Now, though I’m not completely free of the pernicious pest, I do take some satisfaction in seeing my plastic waste bin, which I need to empty only once in two weeks or so. And of course the organic waste goes in the compost pit behind my house, where at least eight mango seedlings are rearing their lovely heads right now.

In these last few years, organic has also become a big thing. At first, I thought it was an expensive fad, but as I began farming and reading about how chemical fertilizers and pesticides are affecting the earth and its inhabitants, including us, my attitude began to change. I’m now completely convinced that organic is the only way to go. Along the way, thanks to my younger daughter turning vegan, my eyes have been opened to the exploitation of animals that even lacto-vegetarians passively condone, and have cut most of the dairy out of my diet.

I like to think of all this as a process of personal evolution but I fear, a lot of the time, that I’m just turning into a crackpot. I’ve even taken to haranguing shopkeepers and other shoppers, urging them to carry their own reusable bags.

In this post, I share some of the alternatives I’ve found, and I hope they inspire you to join the quest. Some of these I’m going to stick with for the rest of my life, and some are halfway houses, which I hope to improve on.

It’s been a long road, but finally I buy almost all my groceries without any form of packaging. Initially, this involved carrying many bags to many provision stores and buying what I could get ‘loose’ in each store. This was complicated by wanting to go organic at the same time – organic stores are still a rarity, though more and more stores are stocking organic labels like 24Mantra, ProNature, etc. In Bangalore, there are a few organic shops in each part of town. In our locality, there’s Adi Naturals and the 24Mantra shop, where a few staples like rice and dals are sold loose, but most of it is packaged goods. I would trudge from shop to shop with my umpteen bags, buying whatever I could find without packaging – which varied from day to day. It was difficult and discouraging; the shopkeepers clearly thought I was crazy and a nuisance, while I futilely tried to convince them of the evils of plastic.

Then suddenly, like the answer to a prayer, Navadarshanam – a Gandhian community near our farm – started a new initiative, Community Supported Agriculture, in which they bring together farmers and consumers. The idea is to encourage farmers to grow organic by assuring them a monthly income. Each participating family gets a weekly basket of 6 kg of assorted local, seasonal vegetables – as well as any groceries we order from Navadarshanam itself. I should mention that Navadarshanam facilitates a self-help group of local women, and sells their value-added products like stone-ground atta, sprouted ragi flour and dalia, pickles, etc.; it also sources organic food items from other organic farms. (I have much more to say about them, and it’s all good. But I will save that for a future post.)

I negotiated with them to deliver all my groceries in cloth bags I would provide each time, and spent a couple of days stitching a pile of drawstring cloth bags, cut from sturdy old Malayala towels. And voilà! I now get all my groceries in cloth bags. Oil, pickles, etc come in returnable bottles, and sweets and cake in my own dabbas. No more wandering from shop to shop like a mad woman, no wondering what to buy or what to cook and, best of all, no more plastic!

As for bread and biscuits, I bake my own. (It’s true, I don’t have a job, but honestly it probably takes just about two or three hours a week.) My savoury biscuits are flavoured with jeera, kalonji and ajwain, and my sweet biscuits with cinnamon. They are delicious, though I say so myself! A trifle al dente, maybe, but it’s good exercise for the jaws, and somehow more satisfying than those melt-in-the-mouth biscuits you get in the market. Write in if you want my recipe!

We are family of inveterate snackers; of a Sunday afternoon, you’ll likely find us each curled up with a book and a large bowl of something crunchy! So I buy pori (puffed rice) in bulk in a humungous (reusable and reused!) plastic bag, and every few days, I make a salty, spicy peanut-pori mixture. Healthy and easy!

Once in a while, when we crave something unhealthy, we go hunting, armed with tiffin carrier and dabbas. Momos, pizza, jalebis, chips, pakoras, whatever – the main thing is the dabbas.

We carry our own water bottles with us wherever we go, and would almost sooner die than buy bottled water. (Luckily, some soft drinks do still come in glass bottles.)

In the rate event that a plastic bag or box sneaks into our house, it’s like the Hotel California – they can never leave. I wash, dry and reuse them until they are falling to bus. What I can’t reuse goes to the recycling centre.

Detergents, strong chemicals, bleaches and acids are as bad for the environment as plastic. Our water bodies are terribly polluted by these avoidable products. As well, most of them contain plastic micro-beads, which are killing off marine animals in droves. Not to mention the plastic containers. Over the last few years, I have switched over to plant-based, earth-friendly alternatives.

For laundry, I now buy a biodegradable laundry powder by Rustic Art, from Pune. Its packaging is biodegradable too. À propos, did you know that cellophane is not plastic, and is biodegradable? As an alternative, I use soapnut juice. I can’t claim that my clothes are dazzling white like Lalitaji’s (of Surf fame), but I have made my peace with that. Unbleached cotton is an option I need to look into, for towels, salwars, pyjamas and so on.

For washing vessels, I use a mixture containing shikakai powder, soapnut powder, sometimes chigare powder (a kind of leaf commonly used in Karnataka), besan, firewood ash, and powdered lemon peel. Unfortunately, I haven’t yet found a non-plastic-bagged source for the first three. In the long run, I hope my farm with supply me with these and I won’t have to buy them.

My scrubbers come from the amazing luffa sponge gourd that used to grow madly all over our place.I still can’t get over the fact that nature grows these perfect scrubbers! 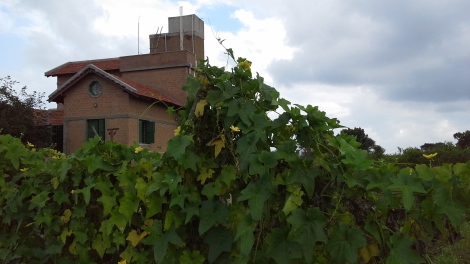 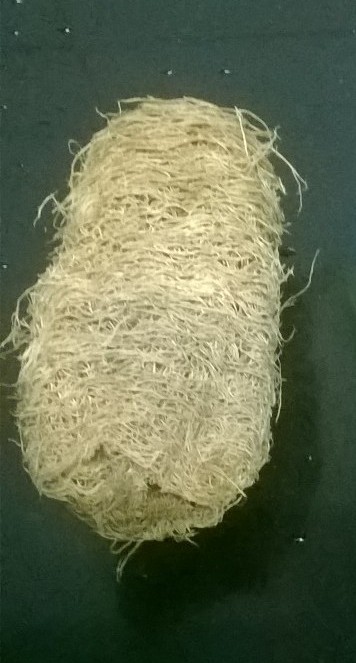 Unfortunately, Rajendra and Raju, our two retainers (about whom, more later), hate alien vegetables and managed to kill it off. But I have a few seeds up my sleeve, so the luffa will hopefully make a comeback. Until then, I have a few hoarded away, and anyway there’s always coconut fibre!

Hold back on the phenyle – coffee grounds are great for de-smelling things!

Mosquito control is a big problem in most cities. We have none on our farm, but in Bangalore we have been unable to live without an electronic mosquito repellant. Even if we use a mosquito net at night, we are eaten alive during the day (dawn and dusk are, incidentally, supposed to be the favoured time of Aedes aegypti, the dengue carrier). But there’s a solution: Reed diffusers are the answer! I now have a jar of lemon grass oil in every room with a few reeds stuck in. It smells wonderful, and both mosquitoes and chemical repellants have become a bad memory. You can make your own lemon grass oil too. Just mix a few drops of the essential oil into half a small jar of any light refined oil, and there you are! When not in use, wrap the reeds in paper and cover or cork the jar to slow down evaporation. You could buy the reeds to start with, and then try out substitutes. As I have a large and growing bamboo colony in my garden, I’m planning to try this, as has been suggested by several people on the internet.

Ants and termites are repelled by castor oil. Though unpleasantly sticky, it’s very effective in keeping the critters out of wherever you want to keep them out.

No solutions in sight yet

With all this, there are some areas I’m stuck without satisfactory substitutes. Any ideas on these?

Update, Dec 2018: Here are some more plastic free ideas: brooms, a mosquito repellent, an all-purpose cleaner, a dustbin, and a multi-purpose flour.

9 responses to “My Plastic-free, Organic Life”